Matt Younkin is a third generation pilot. He is the son of legendary airshow pilot Bobby Younkin, who is famous for his amazing aerobatic displays in the AT-6, Beech 18, Learjet 23, Samson, and most recently, the Super Decathlon. Bobby is considered to be one of the greatest airshow pilots of all time.

Matt is also the grandson of Jim Younkin who is well-known for designing the Century and Trutrak autopilots. Jim is also famous for his antique aircraft restorations, as well as building beautiful replicas of the 1930’s air racers such as the Howard “Mr. Mulligan” and the Travel Air “Mystery Ship.”

Matt learned to fly at the age of 14 from family friend Ken Collier in a Piper J-3 Cub. At age 15, Chuck Irvin, the same instructor who taught Bobby how to fly, refined Matt’s piloting skills. On his sixteenth birthday, Matt soloed his grandfather’s 1928 Travel Air 4000 biplane.

Matt is now proficient in over 85 types of airplanes ranging from the Piper Cub to the Boeing B-29. He is also a fully rated flight instructor and now has almost 5,000 hours of total flying time and currently resides in Siloam Springs, AR.

Matt is also an accomplished radio-controlled model airplane pilot. Like his father before him, Matt learned most of his aerobatic skills by flying R/C models and later refined them in the Super Decathlon.

When Matt took the Decathlon out to perfect his slow rolls, he soon discovered that he could perform every maneuver that Bobby performed in the airplane, plus a few new ones of his own.
Matt’s latest and greatest achievement is perfecting the world’s only night aerobatic display in the Beech 18. Equipped with 17 spotlights and 13 strobes, the top airplane appears to glow in the dark while the bottom side twinkles violently. Combined with smoke, noise, choreography, and an incredible musical score, the Twin Beech Night Spectacular is quickly becoming one of the most sought after acts in the airshow arena.

Matt is also performing the daytime aerobatic display in the Beech 18 that his father Bobby perfected so many years ago. By lacking the intensity night show,
this display has been described by many as “the most graceful and beautiful performance the airshow industry has to offer.”

Bobby always said, “An airshow act must be unique and original to be successful. People come to airshows to see the impossible take place.” Matt is keeping with the Younkin Airshows tradition by performing unique aerobatics in precision aircraft and precision aerobatics in unique aircraft. 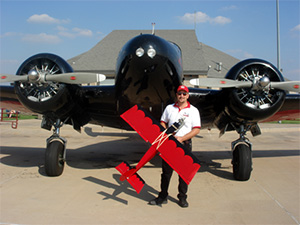 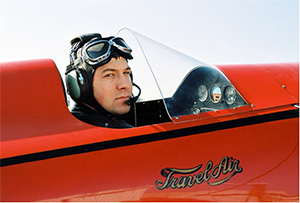 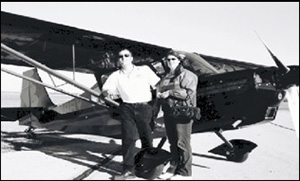 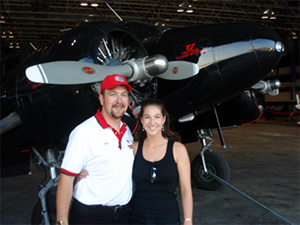